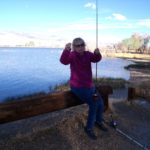 Linda Lou Crosby is an award-winning humor columnist and an Emmy nominated documentary producer. Her last project, “The Gypsy Cowman – a Vanishing Breed,” was a semi-finalist in the Bayou Film Festival.
Crosby is a member of the Dramatists Guild, the broadcast honorary, Alpha Epsilon Rho and achieved a degree in Journalism and Broadcasting from California State College at Los Angeles.
When not working, Crosby enjoys the outdoors fishing with friends or hunting with her husband, Hart Broesel. The couple spend their time in Eastern Montana and Southern California with their dogs.

Laura Dobbins is a former newspaper editor recognized for her work as a reporter and designer by winning several journalism awards to include journalist and designer of the year in Southern California.
Currently she operates Kindle Book Promos a site dedicated to helping authors and promoting their works. Both free and paid opts are available: http://kindlebookpromos.luckycinda.com
Laura is a Desert Storm veteran and is always happy to promote authors that write about the military or support our troops.