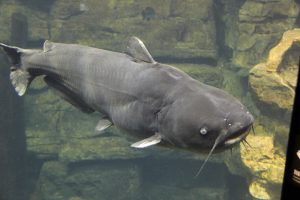 The first catfish I caught was a huge surprise. Laura and I were fishing in a trout tournament. The bite was slow. I got bored and put together a combination of a marshmallow, a fake worm, and squished on some power bait. I tossed my line out into the lake – where the wind was blowing at about 35 miles an hour. And WHAM! My rod went down in a flash. I learned that catfish will hit the bait hard. Very different from the delicate nibbling of a trout. Boy was I surprised. I reeled in a nice size catfish.

“This is a trout derby,” Laura reminded me. Heck, it was a fish. There are lots of different kinds of catfish. In fact, there are about a zillion categories of them. For our purposes there are Channel Cat, which are the most numerous. It is even the official fish of four states; Iowa, Missouri, Tennessee and Nebraska. They have a keen sense of smell and taste. I still wonder what attracted that fish to my weird getup that day. That’s the mystery of fishing.

Cat can get huge, 40-50 pounds (or 20 like the one Laura caught in Montana on the Yellowstone), or be a couple of pounds, like my catfish was that day. They often co-exist with Blue Cats, that are generally the largest, or Flatheads that are close in size to the Blue Cats. Yikes! Catfish are bottom feeders, although I am sure my marshmallow was afloat when that fish took the bait. They have barbels (barb things) on them which you have to be careful not to touch when you handle them. They don’t have scales like other fish. They inhabit lakes, reservoirs, and rivers. They like secluded areas in deep water, where they can have cover, yet be able to access shallow feeding areas.

I know one thing, when Laura was working to get her 20 lb Channel Cat in from the Yellowstone River, it looked like she was tugging on a giant log. In fact, she was tempted to cut the line, until she actually saw the fish – which wasn’t too easy as it was about 9 p.m., and about 20 degrees.

Catfish can be found in many places, so look for them in your reservoirs and rivers. You won’t be disappointed.