Blue Gill Are Fun to Catch 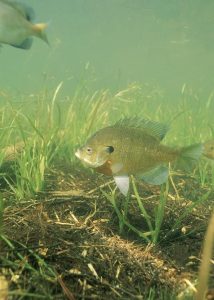 I hadn’t fished for Blue Gill for some years. And my friend Laura and I got pointed to a special fishing spot near Bishop, California. The great thing about bumping into other folks that are fishing is that there are some super people out there that will share either their special spots, or tackle discoveries with you.

I get excited trying new things. Sometimes the experiment even works. This day, the bobber floating out into Blue Gill territory, with a worm about 24 inches below, worked great. We actually started out fishing for Bass that day, and ended up catching some great Blue Gill.

Blue Gill can be small, which makes them not good for eating, but still fun to catch, as they are powerful little guys for their size. And they will eat anything they can put into their mouths. Blue Gill can grow to over 4 pounds, about 12 inches long. But the blue gill we caught that day were around a pound, and plenty good to filet and eat.

These Blue Gill were nestled in lake vegetation, where they are often found. They will hide out in deep or shallow lakes or ponds, and can be found in shaded areas along the banks.

Blue Gill are snacks for plenty of other fish including: Bass (which we began looking for), snapping turtles (which you find more in the east – thankfully), and Blue Herons – which we saw gracing the area we fished. I am pretty sure the Herons were having a nice meal. And with Laura filleting our catch, and a good fry pan, so did we.